Making a Difference in our Community 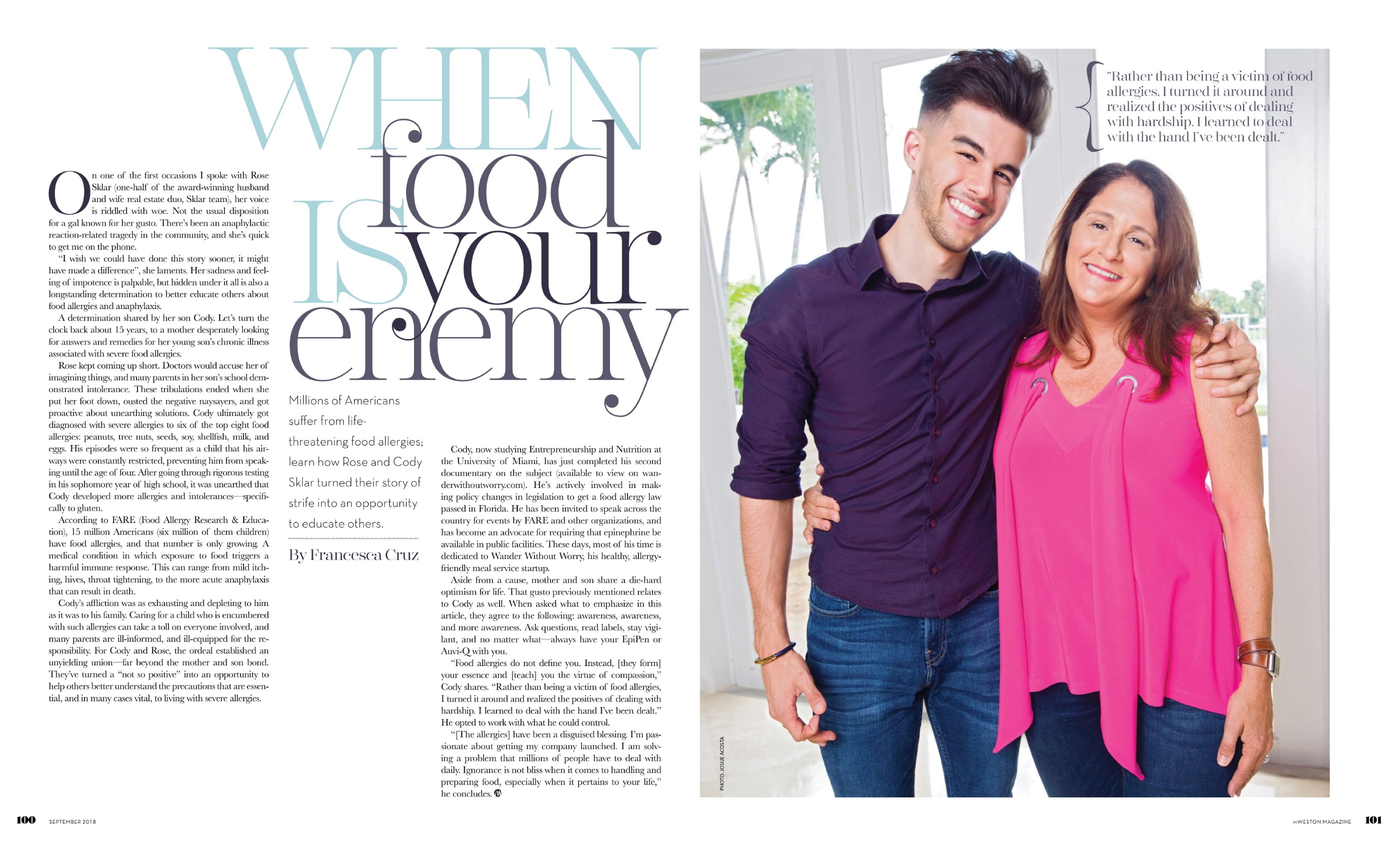 Millions of Americans suffer from life-threatening food allergies; learn how Rose and Cody Sklar turned their story of strife into an opportunity to educate others.

On one of the first occasions I spoke with Rose Sklar (one-half of the award-winning husband and wife real estate duo, Sklar team), her voice is riddled with woe. Not the usual disposition for a gal known for her gusto. There’s been an anaphylactic reaction-related tragedy in the community, and she’s quick to get me on the phone.

“I wish we could have done this story sooner, it might have made a difference”, she laments. Her sadness and feeling of impotence is palpable, but hidden under it all is also a longstanding determination to better educate others about food allergies and anaphylaxis.

A determination shared by her son Cody. Let’s turn the clock back about 15 years, to a mother desperately looking for answers and remedies for her young son’s chronic illness associated with severe food allergies.

Rose kept coming up short. Doctors would accuse her of imagining things, and many parents in her son’s school demonstrated intolerance. These tribulations ended when she put her foot down, ousted the negative naysayers, and got proactive about unearthing solutions. Cody ultimately got diagnosed with severe allergies to six of the top eight food allergies: peanuts, tree nuts, seeds, soy, shellfish, milk, and eggs. His episodes were so frequent as a child that his airways were constantly restricted, preventing him from speaking until the age of four.

According to FARE (Food Allergy Research & Education), 15 million Americans (six million of them children) have food allergies. A medical condition in which exposure to food triggers a harmful immune response. This can range from mild itching, hives, throat tightening, to the more acute anaphylaxis that can result in death.

Cody’s affliction was as exhausting and depleting to him as it was to his family. Caring for a child who is encumbered with such allergies can take a toll on everyone involved, and many parents are ill-informed, and ill-equipped for the responsibility. For Cody and Rose, the ordeal established an unyielding union—far beyond the mother and son bond. They’ve turned a “not so positive” into an opportunity to help others better understand the precautions that are essential, and in many cases vital, to living with severe allergies.

Cody, now studying Entrepreneurship and Nutrition at the University of Miami, has just completed his second documentary on the subject (available to view on WanderWithoutWorry.com). He’s actively involved in making policy changes in legislation to get a food allergy law passed in Florida. He has been invited to speak across the country for events by FARE and other organization, and has become an advocate for requiring that epinephrine be available in public facilities. These days, most of his time is dedicated to Wander Without Worry, his healthy, allergy-friendly meal service startup. VISIT WEBSITE: WANDERWITHOUTWORRY.COM

Aside from a cause, mother and son share a die-hard optimism for life. That gusto previously mentioned relates to Cody as well. When asked what to emphasize in this article, they agree to the following: awareness, awareness, and more awareness. Ask questions, read labels, stay vigilant, and no matter what—always have your EpiPen with you.

“Food allergies do not define you. Instead, [they form] your essence and [teach] you the virtue of compassion,” Cody shares. “Rather than being a victim of food allergies, I turned it around and realized the positives of dealing with hardship. I learned to deal with the hand I’ve been dealt.” He opted to work with what he could control.

“[The allergies] have been a disguised blessing. I’m passionate about getting my company launched. I am solving a problem that millions of people have to deal with daily. Ignorance is not bliss when it comes to handling and preparing food, especially when it pertains to your life,” he concludes.